Could the Divina format be useful for webtoons?

Home 2021 October 1 Could the Divina format be useful for webtoons? 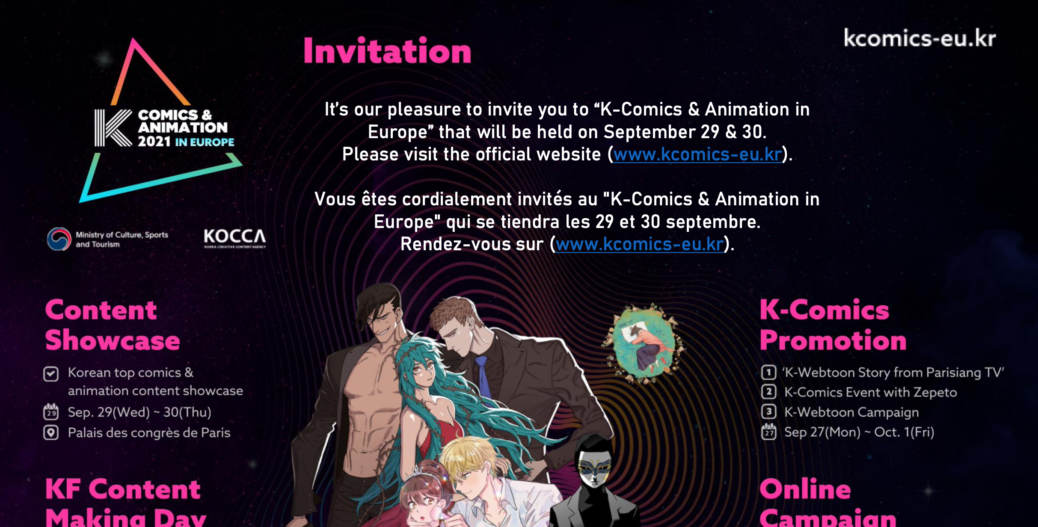 On September 29th and 30th, at the Palais des Congrès in Paris, Korean producers of Webtoon were put in contact with potential buyers of rights in France. I went to this meetup to ask these producers about their potential interest for the Divina exchange format incubated at EDRLab.

The Divina format is already capable of “packaging” webtoons. It allows to enrich the work with a set of metadata, a table of contents, web links (to the next episode?), speech bubbles translation, sound effects, or transition effects between different “parts” of the same episode.

The exchanges I had with C&C REVOLUTION or D&C WEBTOON Biz have a bit dampened my hopes. Indeed, the production of webtoons, as we know, is particularly industrial. A webtoon author is required to create one episode per week, often for a single platform. This very fast pace forbids the search for complex effects: efficiency takes precedence.

The image files, in PSD or JPEG format, are transmitted in a “raw” way, without metadata. Metadata is added directly to the broadcasting platform when the episode is published; it is also this platform that transforms the PSDs into JPEGs or PNGs optimized for Web use. This transfer mode without metadata is also used in case of license sales abroad.

Some webtoons do contain background music or sound effects: we found some examples of this type on the Naver platform (e.g. Brothers Bond ep 31 and 35). But this remains rare and limited, and webtoons readers do not seem to be on the lookout for such effects.

The enrichment does not come from the webtoon itself, but from the products associated with it: when a series is successful, the studio develops figurines, paper books, a TV series etc. that enrich the universe of the series. In some cases, the webtoon itself is conceived as an entry point to a larger universe, and I was able to discuss with a studio from Reunion Island (Beyond Stories) which has a very clear vision of a progression starting from a webtoon, a product used to find the necessary funds for the development of a work in Live Motion (shot in Reunion Island), completed later by a complete universe.

Even if enriched webtoons are not for tomorrow, the Divina format brings to producers the ability to attach rich metadata to images, to create multilingual webtoons, to add when needed background music or sound effects to an episode. One of the Korean studios we contacted asked us for information about the Divina Studio software developed by our partner Kwalia, which shows that these arguments could finally hit home.

More about the Divina format here.